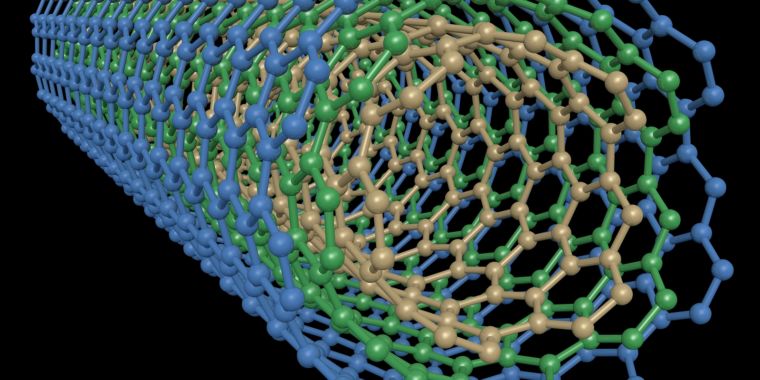 A carbon nanotube is tough—by some measures, more than 30 times more robust than Kevlar. As they’re only a few atoms thick, however, that toughness isn’t especially useful. Attempts have been made to bundle them together, but nothing has worked out especially well; the individual nanotubes are typically short, and it’s difficult to get them to all line up in the same direction.

As a result, these attempts have resulted in bundles that are filled with structural defects, often perform worse than Kevlar, and are only a few micrometers long. Now, a group at Beijing’s Tsinghua University seems to have found a way around many of these problems. It was able to synthesize nanotubes that are centimeters long and bundle them together to make a fiber that’s nearly as strong as an individual nanotube.

It’s not quite time to start booking rides on a space elevator, but this work at least hints that nanotubes might eventually break out of the realm of the microscopic. While the authors note that this work could find a home in ‘sports equipment, ballistic armour, aeronautics, astronautics and even space elevators,’ we’re still a long way from any of that. Ideally, rather than synthesizing the nanotubes in centimeter-long chunks, we’d like to have some sort of continual production process.

Still, the work is important in that it hints that there is a world beyond micrometer-scale nanotube fragments.