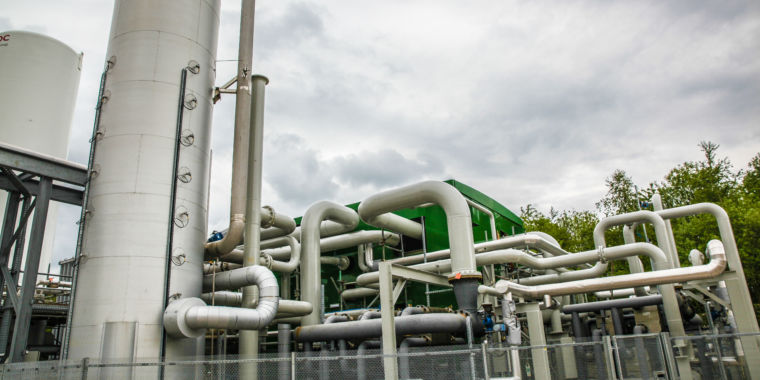 A first-of-its-kind energy-storage system has been added to the grid in the UK. The 5MW/15MWh system stores energy in an unusual way: it uses excess electricity to cool ambient air down to -196°C (-320°F), where the gases in the air become liquid. That liquid is stored in an insulated, low-pressure container.

When there’s a need for more electricity on the grid, the liquid is pumped back to high pressure where it becomes gaseous againand warmed up via a heat exchanger. The hot gas can then be used to drive a turbine and produce electricity. This new LAES system is being built by a company called Highview Power in Bury, near Manchester, UK, and it’s connected to the Pilsworth Landfill gas site, a power plant that burns methane from the landfill to create electricity.

The plant was built in partnership with Viridor, a recycling and renewable energy company, and IT received £8 million from the UK government (about US$10.7 million). This demonstration liquid-air storage system was preceded by a350kW/2.5MWh pilot system at an 80MW biomass plant west of London between 2011 and 2014. The Bury demonstration plant is, in fact, significantly behind schedule—it was commissioned in 2015 and was expected to be up and running shortly thereafter.